I recently installed a new Sunline Fuel Screw in my 2004 CRF250X. In order to do so, I had to break the carb loose from the airbox-to-carb boot and the carb-to-cylinder boot so that I could turn the carb out toward me to get to the bottom of it. Boots circled below, although airbox-to-carb boot is hidden behind frame. 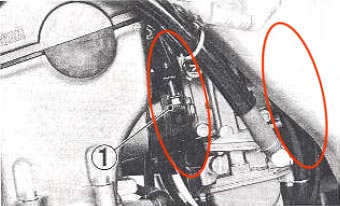 First I had to remove the seat, shrouds, tank and fuel line, side panels, muffler mounting bolts, and lower subframe bolts. Then I had to loosen the upper subframe bolt, the airbox-to-carb band screw, and the carb-to-cylinder band bolt. After lifting and rotating the subframe up until the rear fender rested on the tank-or rather, where the tank used to be-I could now break the carb loose from the boots and rotate it.

However, upon finishing the job of installing the fuel screw, I ran into a nightmare of a time getting the carb reconnected to the boots on each side. With the aluminum twin spar frame, there is hardly any room to work and maneuver the carb. I’m ashamed to say it took me 3 times thinking I had it together and then having to tear the bike back apart again to fix it.

The trick that I finally figured out was to take a tiny bit of grease and run it around the inner lip of each boot. This allowed the carb to slip into it with far less effort on my part. It was amazing to me how I could spend so much time trying to get these parts to fit together inside the bike and then just by adding a tiny bit of grease I had them both connected in a couple minutes.

Incidentally, and thankfully, the bike won’t start if there’s a leak in the carb-to-cylinder boot connection. I’m not sure if this is because the cylinder can’t create the suction needed for the venturi in the carb or if it’s because all the gas was leaking out through the boot connection, but it helped me determine that there was a problem.