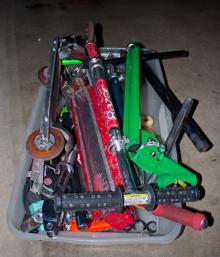 When you’re the scooter mechanic for a fleet of kids, you end up with a graveyard of parts like I have.

If your kid is serious about freestyle scooter competitions, you’ll find very quickly that trying every possible part and combination of parts is ingrained in the culture. As a parent, it can be very frustrating and expensive. Try to find a way to balance economic concerns and part swapping with your kid’s need to feel like he belongs to the culture.

“I want to try the new District V2 deck. Can we get one?” “But I just bought you a $230 Phoenix Integrated deck!!” Believe me, I know how frustrating this can be, so try to be patient and understanding. Probably the most important thing to remember is this: no matter how right you are with your prediction of what he’ll think of a certain part, you’re never going to convince him until he tries it for himself. If it’s financially feasible, purchase the new part and save the one you think is the right one. He’ll most likely try the new one, go through a brief honeymoon period with it, and then come to realize that you were right. Well, he’ll realize that he is right, once he changes his mind to your opinion.

Sometimes the justification for parts requests can seem irrational and illogical. In fact, they probably are, but kids often can’t articulate what they are trying to express. I’ve found that sometimes scooter kids express frustration with the weight of their deck, when the problem is really the headtube angle or the bar height. That is, a kid may complain that a scooter is too heavy when they are actually feeling bars that are too high or a different headtube angle than what they are used to.

Even when your kid has a valid point for wanting a new part, the results can be somewhat contradictory. My scooter kid was riding a Brand X deck that was a considered medium-weight. After riding someone else’s Brand Y scooter that had a lighter deck, he wanted a Brand Y deck. He begged and begged me for one saying that it would let him do tricks he couldn’t do on his Brand X deck. Eventually we got one and he loved it. So then he was riding a Brand Y deck that was slightly lighter than his Brand X. Within a few months, he decided he wanted to try a Brand Z deck, which is actually heavier than Brand Y and Brand X. At first, I said no and reminded him that he wanted a Brand Y deck because it was lighter than Brand X and now he was asking me for an even heavier deck. After a couple of months, I broke down (because I’m a sap) and bought him the Brand Z deck. To both of our surprise, he was able to do all the same tricks on it as the Brand Y deck, more or less.

In the end, it wasn’t the weight, the headtube angle, the width, the material, or any other factors that made him a better rider. Paxton could adjust to all three decks and be successful on them. I knew that the Brand X deck wasn’t holding him back, but he had to learn that for himself. Now he loves all three decks for their different reasons and he continues to ride them all. Keep in mind, some kids are more sensitive to part changes than others. I’m lucky enough to have a kid that is pretty adaptable to different parts, but not all kids will be able to swap parts so easily. Unfortunately, he’s also relentless when it comes to begging us for new parts. In the end, though, it’s worth it. We don’t give him everything he wants the instant he wants it, but we try to help facilitate his exploration of the sport he loves.

Skate parks and competitions are often rife with parts trading and sales schemes. Be sure to tell your kid that he should run all part trades through you for approval. I have often seen older kids trying to trade younger kids a crappy wheel for a nice wheel that the younger kid owned. The older kid tried to convince the younger kid that it was a good trade, but he was just trying to take advantage of the younger kid’s inexperience and ignorance. Also make sure that the new part will work with the rest of your scooter, as not all parts are compatible with others. For example, Madd Gear scooters have shorter forks than other scooters, so you can’t use a Madd Gear fork on another scooter and you can’t use a non-Madd Gear-compatible fork on a Madd Gear deck.

It’s fine to tell your kid that the constant part swapping and upgrades he wants to do are unreasonable and expensive, but also try to facilitate his experimentation with parts whenever possible. For example, trying multiple decks can get really expensive, but grips, griptape, and wheels are relatively inexpensive and will allow him to experiment. In the end, your scooter kid just wants to have the best fit and feel for his scooter, but he also wants to fit into the culture. Help him make wise choices, be true to himself, be safe, and have fun!