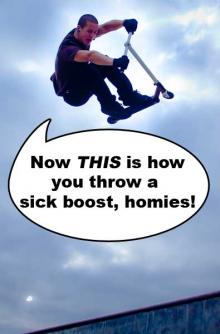 We had a lot of fun with our tongue-in-cheek, yet informative, Scooter Lingo - Volume 1 article which resulted in quite a few web hits and some positive feedback. This article, volume 2, covers a few more terms that you’ll hear from scooter kids around the skate park. Don’t forget the 3 most important terms from volume 1: legit, dialed, and steezy. :o)

Well, that’s all I have for right now. I’m not sure if there will be a volume 3 yet, but I’ll start collecting terms if I run across any. I hope you’ve had fun with these articles. Remember, kids, your parents probably have no idea what you’re talking about, so let share this article with them so you can have hip parents who know all the lingo. ;o)