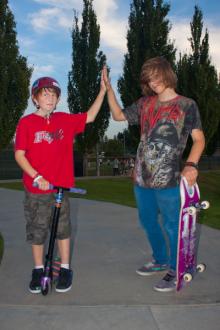 Show the respect for others that you want them to show to you. Share the park.

One of the biggest challenges young freestyle scooter riders face is criticism at the skate park. Many people think young kids on scooters are out of control, oblivious to other people around them, and they get in the way of more experienced riders at the skate park. While this may be a fair criticism in some instances, most of the time, young scooter kids are in the same boat as kids on skateboards, BMX bikes, or inline skates. Unfortunately, scooter kids seem to take an unfair share of criticism at the skate park from the older kids. This is likely due to the fact that scootering has an easier entry point. That is, it’s easier for a young kid to get on a scooter and ride around the skate park than it is for that same kid on a skateboard.

Like every other sport or activity, scootering cannot grow without constant infusion of new young riders who want to learn and grow up to be like the pros they admire. Without scooter kids, there won’t be anyone to push the sport forward.

If we want freestyle scootering to be taken seriously, we need to improve the image we convey to others, including older scooter riders. Some people see scooter kids as an annoyance who just get in the way. But whatever level of rider you are, whether you’re on a Razor A2 scooter or a Phoenix Reventon, you can do your part to better represent the sport.

Before hitting the park, young kids should learn skate park etiquette so they are respected by everyone else at the park. It sounds cliché, but it always comes down to the “golden rule”: treat others as you would like to be treated. Show respect. And it’s that easy.

Okay, that sounds simple enough, but what specific things can you do to be respectful and represent scootering well while at the skate park? Let’s look at a few specific tips you can learn and share with others to improve the image of scooter kids. While I may primarily refer to the skate parks, these same concepts apply to street riding as well.

One of the first things we taught Paxton when he was starting to ride at skate parks was to “watch the lines”. We would make him stand and watch other riders for a few minutes before venturing into the park so that he could learn the traffic patterns and not ride against the flow of other riders. This helps reduce the risk of a collision and reduces the interruption to other riders in the park.

Even to this day, anytime we go to a new skate park, we still remind him to “learn the lines”.

When young kids are first learning their way around a skate park, they often don’t have the skills to move freely and effectively across obstacles. Crossing the skate park from one area to another can be very dangerous to the beginner rider as well as veteran riders who may run into them. Similar to the “learn the lines” lesson, teach your scooter kid that the skate park should be treated like a busy street: always look both ways before crossing. Make eye contact with other riders if possible before crossing to ensure that they see you. Move quickly across the lines to have the least impact on other riders.

Don’t be a Snake

As defined in Scooter Lingo - Volume 2, snaking is the act of taking someone else’s turn on a line or obstacle. This is one of the biggest issues scooter kids face in improving their relationship with older kids at the park. As with crossing, watch the lines and make eye contact before taking your turn. It is far better to let someone else have an extra turn while you wait than it is to go when it’s their turn. Be the bigger person and be generous with turns, especially if you are still learning your way around the skate park.

Sometimes you may think it’s your turn and you’ll go right when someone else is going. Try to stop and apologize for the misunderstanding. DO NOT yell at them and accuse them of snaking you. It was likely a miscommunication, so don’t make a big deal about it. “Whoops, sorry man. I didn’t see you going there. Go ahead.” Being humble is better than arguing over whose turn it was. Think about what’s important and how you represent the sport.

While you’re waiting to go, be ready…but not too ready. You want to be ready to go quickly, but if you look too eager with 5 riders left before it’s your turn, they may think you are trying to snake them. Confused yet? It’s okay. It’s a subtle body language that you’ll learn with time. One example happens with riders all perched at the top of a quarterpipe or bowl. If you aren’t about to drop, you should stand back from the edge with your scooter off the coping. If you are about to drop, you should place your scooter on the coping with your front wheel hanging off to signify that you’re ready.

When it’s your turn, don’t make people wait for you to get into position. They won’t know you’re even waiting for a turn if you don’t look prepared.

Be Positive and Supportive

There is a lot of unspoken animosity at the skate park that feeds the “skater vs. biker vs. scooter” mentality. I’ve never understood this at all. We are all alternative sports people who enjoy doing fun tricks with our friends. What difference does it make what you ride?

If you want to be respected as a scooter rider, then you should respect everyone else equally. Treat skaters and bikers the same way you want to be treated. If a skater or biker lands a cool trick, call it out: “Hey, that was sick!”. If someone gets hurt, give them space, offer to help if you can, and give a few claps when they get up. Even if you have a beef with someone, if they are hurt, you need to set those issues aside. No argument is worth not helping someone in need.

Just because you see something laying around at the skate park, that doesn’t mean it’s free for the taking. This applies to bags, jackets, scooters, skateboards, bikes, food and drinks, and just about anything else you can think of that someone may bring to the skate park. Sometimes people forget something when they leave. They might remember it an hour later and return to pick it up. It shouldn’t be missing because someone decided they could take it.

Sometimes people have leftover food or drinks. They might be willing to share, but you shouldn’t assume that it’s yours. You can ask if you may have some, but respect their decision if they say no. You wouldn’t want someone taking your stuff, so don’t take someone else’s, no matter what it is.

Always pick up after yourself. Don’t leave your garbage laying out to be blown around or picked up by someone else. Take care of the skate park as though it was your own. It’s your duty to keep the park and street clean from your garbage. If there are no garbage cans around, keep your trash collected and throw it away later when you leave. If you hauled it in, you need to throw it away or haul it out.

Did I Mention Respect?

If you show respect to others, you earn respect for yourself. We all want freestyle scootering to be respected and taken seriously. Your actions will impact that perception, so take responsibility and follow skate park etiquette wherever you go.

Teach your kids about skate park etiquette and why it’s important. But remember, we are only human and we all make mistakes. In the moment, kids might not remember these lessons. We have to remind Paxton all the time. But the point is, we try. We want him to be respectful and represent the sport in a positive way. Unfortunately, that doesn’t happen ALL of the time. But if he remembers how to act respectfully even part of the time, he’s doing his part to improve the image of scooter kids everywhere.