Use creative angles and filming techniques to stand out in the crowd.

Has your scooter kid been hounding you to make videos for him yet? If not, it’s coming, so be prepared. Videos are a big part of the freestyle scooter culture and if your kid sticks with the sport, he’s going to want to start making videos.

Until your scooter kid can throw double back flips with Dakota Schuetz and 1080s with Tyler Bonner, he’s going to need a way to stand out in videos, so why not help him out with some creative filmmaking? This article and the accompanying video will outline some examples of how to use creative camera angles to make more interesting videos.

If you want to skip right to the video tutorial, you can find it at the bottom of this article.

One of the best things you can do to engage your viewers is to try to put them in the shot. That is, shoot from the perspective of someone that is on the scene of the video, not someone who is a spectator from the stands. This means that you need to get out on the skate park. This isn’t always possible, especially when the park is busy, so you need to be brave and you might need to hit the park on off hours. The lighting is great around sunrise and most skaters are still snoozing in the early morning, so if you’re shooting for an edit, try hitting the park early in the morning to get your shots.

To help with my shooting, I draw inspiration from motocross videos. One of the things I learned from those cinematographers is shooting from behind the take-off ramp. While this doesn’t feature the rider’s face, it does put the viewer in the same angle as the rider while he’s performing the trick. This will help the viewer feel like he’s in the movie.

Getting your camera low is a tip that a lot of skateboarders use because the action is at your feet! You can buy a cheap but very useful and sturdy Opteka X-Grip Pro Video Stabilizing camera grip from B&H Photo Video for $30 that works great! I have one of these and I highly recommend it. Not only does it let you get your camera close to the ground, but it also adds weight in a stabilizing fashion to reduce vibration and bounce in your videos.

You can see a great example of getting the camera low in the main image for this article…although that “low” camera happens to be on top of a 12 foot (or is it 16 foot?) roll-in at Skate Barn.

The opposite works just as well. While everyone else is filming at five and a half feet, you should try getting your camera low AND high. Get on top of ramps, ledges, or whatever you need to mix up the shots. Some of my favorite shots are semi-bird’s eye shots. Ideally, a camera jib (crane) or a helicopter would be fantastic for some really interesting shots, but getting a permit to fly low over a skate park might be difficult. Oh…and helicopters are pretty expensive too. :o)

The video below features a shot of my scooter kid, Paxton Swygard, clearing the spine at Skate Barn, which is an example of using this technique. The point is, you can get creative and use elevation changes to make your shots more interesting. You may lose some depth when shooting overhead, but it’s worth it if the effect fits the shot you’re trying to capture.

Whenever I See Your Smiling Face

I’m always surprised at how many times I see amateur sports photographers and videographers forgetting to frame shots with the rider’s face toward the camera. This can be difficult to do based on lighting, location, tricks, and the rider’s natural rotation direction. But the first time I was in post-production with my photos, it was very obvious to me that I needed to spend more effort to get the subject’s face lit and in frame. There are some exceptions when you specifically want the subject facing away from you, but in most cases, you want to try to get the rider coming toward the camera when you’re filming or taking photos. For example, here’s a distant shot of Paxton doing a feeble stall on a quarter pipe: 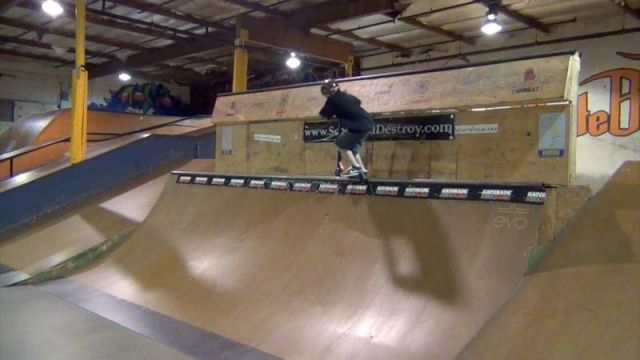 One way to improve this camera angle is to use the previously mentioned technique to get low and shoot upwards. This allows you to get the rider’s face in frame, since he’s often looking down for this trick, and it adds a sense of drama to the shot since the rider is overhead with the ramp and ceiling looming over the camera. Here’s that angle: 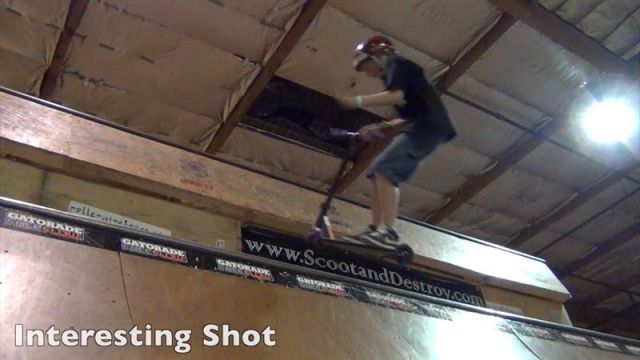 If you have the opportunity to get even closer, you can always try this alternative shot which includes the rider’s face, focuses on the coping, and shows the trick in full detail. 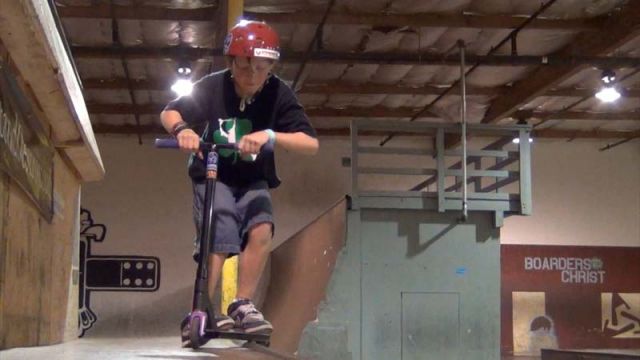 Another way to make a shot more interesting is to master the zoom feature on your video camera. If you can, try to use it to follow the rider’s motion across the skate park. The trick to using the zoom is smooth, gentle pressure so that the zoom doesn’t jump sporadically. If the rider is coming toward you, start zoomed in and zoom out as he comes closer to the camera. If you can, position yourself such that your distance is just right for a fully zoomed out shot. That way, you don’t have to guess where the right spot is to stop your zoom-out. Similarly, if the rider is going away from the camera, start zoomed out with the rider framed properly and zoom in slowly and smoothly as he rides away.

Steal from the Masters

All great artists steal from the masters. This applies to painters, sculptors, musicians, writers, and all other art forms. It certainly applies to videographers as well. We learn from those we respect and we mimic their style as we assimilate those positive traits into our own style. It is my opinion (I’m specifically stating that to avoid a flame war) that most scooter videos look very much like many skateboard videos. That is, they all have a very similar style because that’s what has become popular in the culture. That’s great, but with so many people making the same style of scooter video, there is room for a new generation of scooter videos with a different feel. This is where my comment about stealing from the masters comes in.

When looking for inspiration for filming styles, you should look outside of scooter and skateboard videos. Look at a lot of different types of videos and draw from those styles. Because of my background, I tend to try to pull ideas from motocross and Warren Miller films, but you should watch football, car racing, horse racing, rock climbing, documentaries, and any other kinds of videos that you find interesting. Look for a filming technique in a video you like and find a way to apply it to your scooter videos. Learning techniques and styles from various video sources will help broaden your style and define your own unique vision.

As an example of what I am referring to, here’s a short clip from one of my favorite motocross videos, Steel Roots. I probably watched this video 100 times with my brother when we were younger. This film definitely helped defined my vision for what action sports videos should look like. Even though it’s not a scootering video, I’ve still found ways to apply this style to my videos.

I’m sure it’s much easier to understand what I’m talking about by seeing an example. Since we’re talking about video, let’s take a look at some examples that I put together to illustrate these points. This is my first video using voiceovers because I thought it would be easier to follow without having to read. I may start doing this more now since it seems to flow a lot smoother and it allows me to say a lot more in the video without making it too long. All of these clips were filmed at Skate Barn in Renton, WA in September and December of 2011.

So now that you’ve got some fresh new ideas, get out there and do some filming. Experiment with various camera angles and get creative. Don’t be afraid to ask your scooter kid to hit the same obstacle, doing the same trick multiple times while you film from different perspectives. This will allow you to make some choices in post-production that you wouldn’t otherwise have available to you.