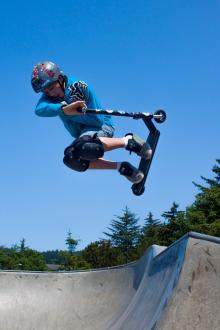 I might not be a scooter rider, but I’ve been around enough scooter competitions to know what kind of performances are successful. In fact, you can watch other sports, such as skateboarding, BMX, inline skating, and freestyle motocross and learn about things that score well with judges. I suspected that scootering was no different and, over the last 3 years, I’ve seen first-hand that my suspicions were correct from big competitions like CooterCon, the Razor Exposed Tour, and the Epic Jam to smaller competitions like our own NW Scoot events.

As we prepare for the RDM Summer Classic, I’ve been thinking about this a lot and talking to my scooter kid and his friends about the topic, so I thought I’d share some of those thoughts with our readers.

How can you put on an impressive performance at your next freestyle scooter competition? Some of these tips can be done on the day of the event and some of them need to be done in advance. While this article is specifically about competing, try to think about how these tips can improve your overall scooter riding and experience and try to apply them everyday. These ideas can even act as good positive-reinforcement topics for you and your friends.

Alright, that’s enough preamble. It’s time for the meat of this article!

One of the most important things you can do before a competition is to get prepared. Usually, when I say “be prepared”, I’m referring to having your scooter tuned up, having replacement parts and tools ready, having drinks to keep hydrated and shade to stay cool, getting a good night’s sleep the night before, and so on. However, in the context of this article, I want to emphasize preparing your tricks for the competition. What I mean is, don’t show up to the event thinking you can pull of a trick that you’ve just barely learned or can only land one out of ten tries. If you can’t land it 75% of the time, it’s not ready for a competition. If you’re having trouble landing it at your local park when riding with friends, you’re sure not going to land it under the pressure of a competition at a new park. Get your tricks ready and forget about those that are not ready just yet. Save them for your next video or event.

Another key factor in being prepared is learning the park as fast as possible. During your warm ups, try out all of the transitions, drop-ins, gaps, ledges, rails…anything you might want to throw into your run. You might have your run planned and realize that you’re done with it in 30 seconds. “Oh no! I’m done with my planned run and I still have 30 seconds! What do I do now?!?!”  Now it’s time to improvise, but if you don’t know the park well, you may not have as many options. Learn the park. Learn it in both directions on each obstacle. Focus on mastering obstacles and building lines, not learning new tricks. If you need to practice your 360-bri-flips for an hour to get them dialed, then they aren’t ready. Save them for the next event. Use the pre-competition time to create and practice your lines at the park.

The Air Up There

To achieve big air, you need two things. First, you need the right body positioning for the type of air you’re trying to catch. If your body is stiff, you’ll follow the contour of the ramp (i.e. quarterpipes will kick you straight up for lots of height, but not much distance). If you want to go for distance, you need to work on conserving your forward momentum by trying to absorb the kick of the ramp. To do this, be loose, flexible, and let the scooter come “into” you as you move through the face of the jump so you project your momentum forward rather than straight up. It’s easier said than done and someone else might be able to explain it better than I can and it’s probably enough for it’s own article. The second thing you need for big air is…

SPEED! That’s the other thing you need for big air. Actually, you need it for pretty much everything. Speed will help you get big air, clear gaps and make transfers, and grind smoother and farther. The faster you move during your run, the more time you have for more tricks! Even when you’re moving from one trick to the next, don’t just coast; push hard the entire time you’re competing. You only have a 1 minute run (usually), so go as hard as you can the entire time. Don’t waste time putzing around the course.

The other advantage speed gives you is that it shows the judges that you’re serious and confident. You want to be out there. You want to use every second of your run to show them what you can do. Speed lets you hit more tricks and shows that you’re aggressive.

“My Scooter is Dialed, I’ve Got Style for Miles”

This one is actually pretty difficult to write about because it’s so intangible: style. Everyone has some kind of style, even if it’s a…well, we’ll say “less desirable style”. You don’t want to look like a fish that just landed on the deck of a boat, flopping around, gasping for air. Here are a few tips for presenting your best style to the judges:

Another good tip for working on your style is to video tape yourself and then analyze your recording. If you can’t see how you look while executing your tricks, then it might be hard to work on your style. It’s hard to define, but it’s something that is uniquely YOU, so do your best to present good style to the judges.

Now that you’ve got the air, speed, and style, start putting together some combos! They don’t even have to be super complex combos or extremely difficult tricks. A 360-no-footer stands out more than just a 360. A feeble-to-270-out will make a much bigger impression on the judges than a feeble alone. Combinations are part of the creative mentality you need to have. Just be careful to find a balance between adding combos that you can land and trying to do too much. It’s better to throw a trick you can land than try a trick you can’t. Be consistent and land as many tricks as you can. Notice that I said “land” rather than “throw” in that last line.

Pick Yourself Up, Dust Yourself Off…and Don’t Repeat

A couple of years ago, in the beginner finals at an event, my scooter kid tried a trick he just learned. He didn’t land it, so he kept trying over and over again. He got hung up on one failure and burned up his entire run trying to land a single big trick. This was a tough lesson to learn, but a very important one for his scooter competition career. If you fall, get up fast and keep going. Don’t waste time feeling bad about your crash, just keep going. The idea is to be as consistent as possible; consistency scores high with judges.

Unless you are certain that you can land the trick you just missed, give it up. If you want to try it again, see if you can incorporate it into your run later. Unless it’s the very last trick in your run, don’t go immediately back and try to land it again. You’ll end up burning time and, if you can’t land it the second time, you’ll start looking panicked and desperate. Shake it off and keep going with your run, doing your very best. The judges know that not everyone will land everything, but they don’t want to see you waste your entire run on one trick.

Similarly, don’t waste time by repeating the same trick over and over again, even if it’s on different obstacles. I recently watched a kid who was really good, but he threw inward bri-flips on almost every obstacle. The first inward was impressive, but after the second, third, fourth, fifth…it became less impressive and I wanted to see something else. Try to throw a variety of tricks, as broad as you can, with very little, if any, repetition. This will help you look like you have a wide portfolio of tricks to draw from rather than just 3 or 4 that you have to repeat.

If you’re a frequent reader of ScooterDad.com, you’ll see a trend throughout many of my articles: attitude. Years ago, I had a Fox Racing hat that read “ATTITUDE IS EVERYTHING”; Even as a kid I believed this and I still do to this day. It’s hard to have a great attitude every day, but on competition day, you must have a good attitude, even if you have to fake it. Judges, sponsors, spectators, friends, family, teammates, everyone wants to see you perform while you’re having a good time and acting professional. Treat the course, your equipment, fellow riders, spectators, event staff, and judges with respect and kindness during the event. While you’re actually on the course competing, do your best to portray a good, positive, confident attitude and that will trickle on to the judges’ score cards.

Putting It All Together

So now that you’re going fast and throwing combos that you’re landing with style, all while smiling and having a good time, well…you still might not win and that’s just the nature of competing. You can’t worry about other riders, but you can focus on doing the very best you can, and that’s what is important. Do your best and have fun! Also, I heard that judges score riders higher if they are rocking a ScooterDad sticker or some ScooterDad Scoot Loot…but that might be just a rumor. ;)