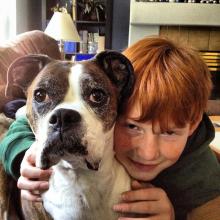 Our unique little kid, Paxton. In case you were wondering, he’s one on the right. ;)

The following article was written by my wife, Dena Carlile, who is the mother of my scooter kid, Paxton Swygard. This has been a challenging article to write as we weren’t sure if being open/honest about Paxton’s diagnosis was a good idea. But we realized that if we can help even one person (parent or child), it’s worth it. I’m proud to feature Dena as a guest writer here on ScooterDad and I’m thankful for her contribution to the site and to all the parents out there who can benefit from her thoughts.

I also hope that this article gives a new perspective to some people who may not realize how many kids at the skate park and elsewhere are impacted by Autism spectrum disorders. I know people often misunderstand Paxton and other kids like him. I hope that every reader of this article can learn to be more open to every unique person and his/her challenges in life.

At three weeks old, I knew my son was different. It took years before we had an official diagnosis, but I knew very early on that he was not like other babies. Like most people, I didn’t know a lot about Asperger’s syndrome or any of the Autism spectrum disorders but I made it my mission to learn everything I could. As it turns out, my son taught me the most important thing I needed to know.

Paxton has always been full of energy. From the time he could move, he was always running, jumping, bouncing, crashing, and spinning. He also loved to swing. As an infant, the baby swing was one of the only things that soothed him. And as he got older, swinging continued to be one of his favorite activities. It would be a few years before we learned that all his activities had meaning and Paxton was doing them for a reason. His therapists called it sensory seeking. This was one of the symptoms that helped us diagnose his Autism spectrum disorder. It’s also one of the most important tools we use to manage his daily life.

Kids on the Autism spectrum often have problems processing sensory input. Their brain gets overwhelmed with messages from a variety of senses and they can’t interpret the signals correctly. Sensory processing is a core skill that most of us take for granted. However, when that skill is missing or impaired, it can cause problems in a variety of areas including social interaction, motor skill development, focus, and attention.

To help Paxton, we took him to an occupational therapist who taught us more about sensory processing. She helped us understand how different activities can impact energy levels and the ability to calm and regulate emotions. To no one’s surprise, we found that swinging was very important for Paxton. It provided something called vestibular input, which is the feeling of movement. In many cases, the linear movement from swinging calms the nervous system and improves attention and focus.

With a regular, consistent amount of vestibular and proprioceptive input, we noticed huge changes in Paxton. In a short amount of time, he was able to:

For two years, our lives revolved around therapy for Paxton. Our house became an indoor playground to provide him with the appropriate amount of sensory input he needed to function on a more even level. Then, when Paxton turned five, something amazing happened. He got his first scooter. It was a Razor A1 model. I don’t even remember where or how he got it, but it didn’t take long to see that he was hooked.

At first, riding in our culdesac provided all the benefits he needed. The vestibular motion of riding a scooter did wonders for his brain. But as he began to learn tricks, the benefits of scootering doubled. The muscle strength involved in pushing, lifting, and twisting a scooter became a great way for him to get proprioceptive input as well. Each time he landed a trick, the compression on his joints and muscles helped calm his nerves and organize his thoughts. Without trying, Paxton had discovered the perfect therapy for himself.

To this day, scootering is the best form of therapy we have found for Paxton. When he is scootering on a regular basis, he is happier, more focused, and better equipped to regulate his emotions. Are things perfect? No. Paxton will always struggle with attention problems and social relationships. But as a mom, I am so thankful he found something he loves that also provides huge benefits to his emotional well-being -– clearly the best trick he’ll ever learn. Now if I could only find an effective therapy for all the haters in this sport! ;-)