I often find myself in discussions with friends about effects pedal order for guitar and bass. Now that my kid has started playing guitar and is getting into pedals, I realized that I didn’t have a good go-to resource for the topic. I decided to write my own article on the subject, not because I have something fundamentally different to say than other people, but because I think I have a better way of presenting the information.

Why should I care?

There is no actual rule for pedal order. These are guidelines. You can do whatever you want. Some pedals may not work exactly as you expect, but you’re not going to harm anything by running them in some atypical order. (Caveat: I suppose it’s possible there’s some combination of pedals that could harm one another in a certain order, but I’ve never heard of it. Usually, it’s only power issues that can damage pedals.) You can always experiment and find what works for you. However, some people, like myself, don’t have unlimited time to try out every pedal in every possible position. I like to learn what I can from others and grow from there.

How could order really matter?

While order of pedals doesn’t matter in most cases, there are some instances where order really does matter. For example, some older fuzz pedals are very sensitive to buffers being in front of them in the signal chain because of [insert explanation here about impedance that I didn’t really understand]. Because of that sensitivity, those old fuzz pedals need to be placed before any buffers in your signal chain.

Alright, I get it. Now tell me the rules guidelines!

As I said and as you’ll read in plenty of other articles on this topic, there are no rules per se, but here are the kinda-sorta rules—more like guidelines—to get you started:

To help visualize this ordering, the following diagram lays out the signal chain guidelines I’ve described above. You can click on the image to view it full-size or you can download the PDF of this diagram below (see the Files section at the bottom of this post). 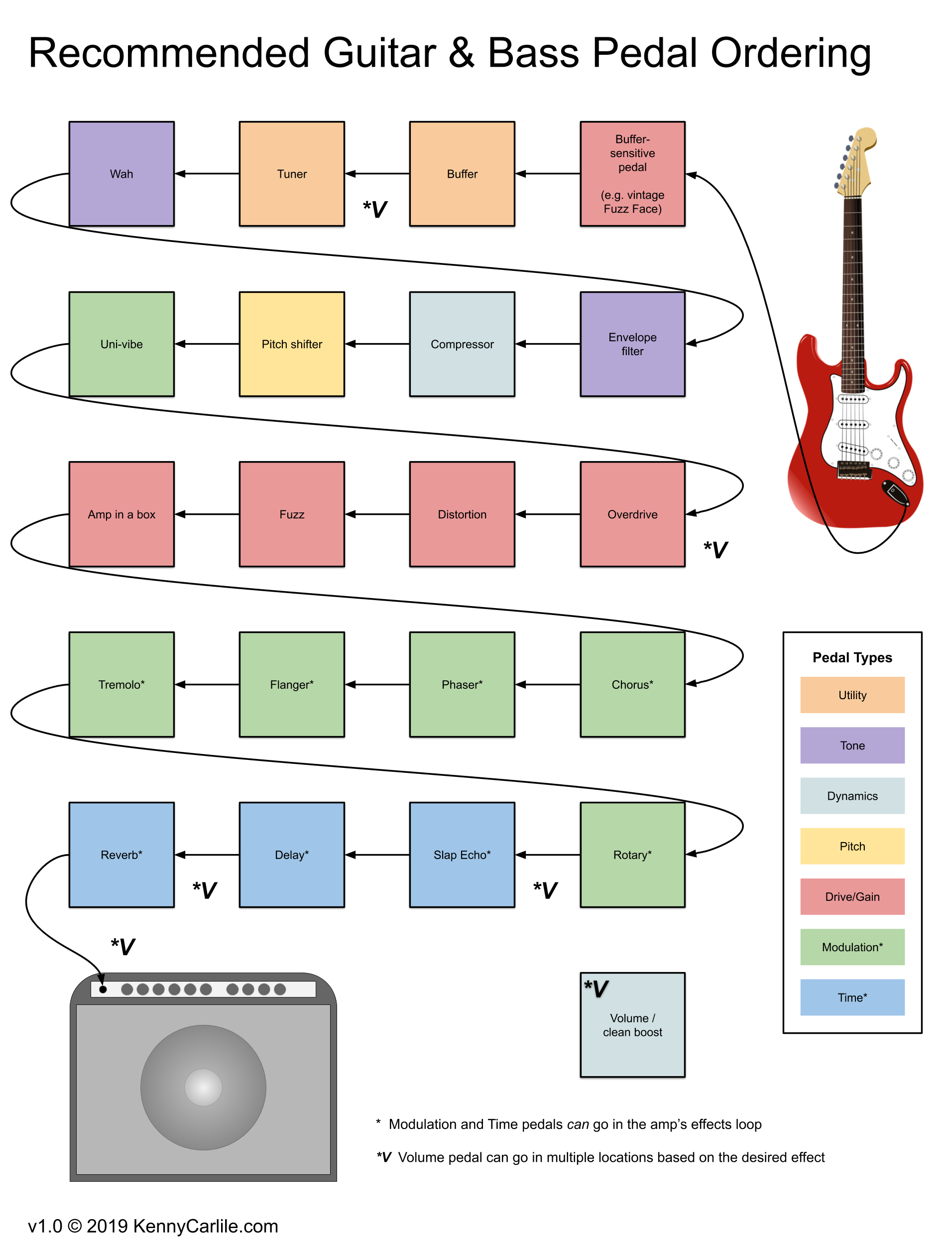 Once you’ve absorbed the concepts here and have an idea of how your pedals might fit into this ordering, give it a shot! My advice is that you leave your pedals loosely mounted or not mounted at all on your board until you have your signal chain confirmed. This will allow you to experiment with placement and ordering without feeling like you are stuck. Also, consider which pedals you use at the same time. For example, if you are never going to use two pedals together at the same time, then the ordering between the two doesn’t matter, so if you need to bend the rules (“guidelines”) to make something fit, go ahead!

Start with the ordering documented here and make adjustments as needed based on sound and location limitations, such as putting your wah on the floor for easier use. This, plus further reading online, is how I discovered that my Uni-vibe sounded so much better in front of my drive pedals. Experimenting is also how I learned that the ordering of compression and envelope filters is so important. Don’t be afraid to make a change; you want your signal chain to work for your sound and your board. Break the rules if you have to as you strive for the tone you hear in your head.

Now go forth and make some awesome music with great tone! :)