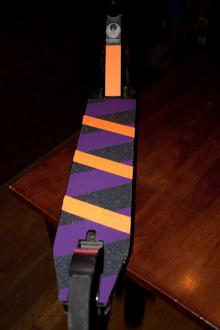 Grip tape is pretty cheap and you can do some cool things with it if you get creative!

Recently, I wrote an article titled Swap Meet - Frequent Part Swapping in Scooter Culture where I discussed an aspect of freestyle scooter culture pertaining to a constant upgrading and swapping parts. I also mentioned in this article that replacing grips and grip tape are a relatively cheap way to make changes to your scooter.

Last week, my scooter kid, Paxton, wanted to change his grip tape because he felt he was losing grip. Like sandpaper, which is essentially what grip tape is, it will become less effective over time as the grit is worn away. Paxton likes colorful, creative things, much like I do, so he didn’t want to go with plain black grip tape. Unfortunately, the skate shops in town didn’t have a very good selection of grip tape with graphics. We found one shop in town that had a few choices in colors, so we bought a few different options since they were cheap at $5-$6 each, depending on color and pattern.

Paxton wanted black, purple, and orange, so I came up with the design scheme you see in the main image for this article. We used two different types of grip tape: one was solid orange and the other was alternating stripes of black and purple. I used a template (from a previous grip tape upgrade; see below for template tips) to cut out a Phoenix 4.0 Integrated deck pattern in the black and purple at an angle. Then, I cut out 1” strips in the opposite angle of the stripes and laid in 1” wide orange grip tape strips and trimmed the edges flush with the purple and black grip tape.

One of our friends also wanted new grip tape, but he wanted black and red stripes. I had black grip tape and red grip tape, so I needed to do the striping manually. I didn’t just want even stripes, so I did them in decreasing size which gave it a slightly different effect. I left the ends red for ease and to tie in the red theme on the scooter. As with the Phoenix, I had an Ultra Pro template that I used to cut out the full red grip tape. Then, I sliced out the areas that I didn’t want to be red and I replaced them with sections of black grip tape. It turned out pretty good and looks better in person that this picture does it justice.

Dakota Schuetz is known for his grip tape with his name, logo, or other features laser-cut into the grip tape. Lucky Scooter Parts also sells grip tape with a clover cut-out. You can achieve this same effect at home, but complex designs would be difficult to do. i’ve seen people cut simple shapes into grip tape, but I haven’t yet tried anything complex using this method. Still, it’s a free (except for time and effort) way to customize your grip tape.

Here are some tips I’ve learned from installing quite a bit of grip tape over the last year:

I hope that helps give you some creative ideas for customizing your grip tape and for saving money on scooter personalization. If you have any other tips, leave a comment. I’d love to hear any other ideas or show me a picture of your creative grip tape design!