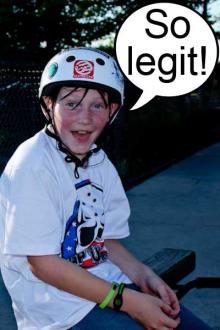 “That scooter is so dialed and those bri flips are legit! You’re riding steezy today. I can’t wait to see that banger in your next edit, homie!”

This is the first article in what I expect will be a series of articles to help teach parents and kids who are new to the scooter world about some of the lingo you’ll hear from other riders. I apologize in advance if some of my definitions and usage isn’t perfect. This dorky ScooterDad will do his best to fit in with the kids and talk the talk. :o)

The first thing to know about scooter lingo is that it comes from the skate park and the streets, so many of the words crossover from skateboarding, BMX, and snowboarding. If you have a background in any alternative sports, you may already know some of the terms. When in doubt, don’t be afraid to ask what someone means. It’s better to ask than assume you know and be wrong.

Listen to how the words are used so you can learn the dialogue like you’re visiting a new part of the world where you have to learn a new dialect. Have fun!

So now you might have some clue as to what is being said around the scooter world. Look for more lingo articles to come! If you have any suggestions for terms you’d like defined, leave a comment below.